ESG, or Environmental, social, and governance, is one of the hottest acronyms representing key buzzwords in sustainable investing at the moment and are being pushed hard in many quarters.

But is it everything here as it seems?

Increasingly we see and hear advocates of ESG and Social Impact claiming they are becoming important considerations for investors and fund managers. That over the next few years as emissions targets deadlines approach they may well dominate investment decisions.

In the last 18 months we have witnessed the economic pressure the COVID-19 pandemic has placed on many industries whilst simultaneously, through their exposure to ESG risks, revealing in many an inability to manage them through a lack of preparedness.

Similar global challenges, such as climate risk, increased regulatory pressures, social and demographic shifts and privacy and data security concerns, represent new or increasing risks for investors. Companies face rising complexities and greater scrutiny if they are not adequately managing their ESG or climate risk.

We are told that as the landscape changes even further more new opportunities will arise.

There are many studies and graphical manipulations, such as shown below; indicating that stocks with high environmental ratings outperformed those with low ratings by a total of 35% between 2012 and 2020. But what is the reality here? What exactly are these stocks? Who’s pushing them? And why? 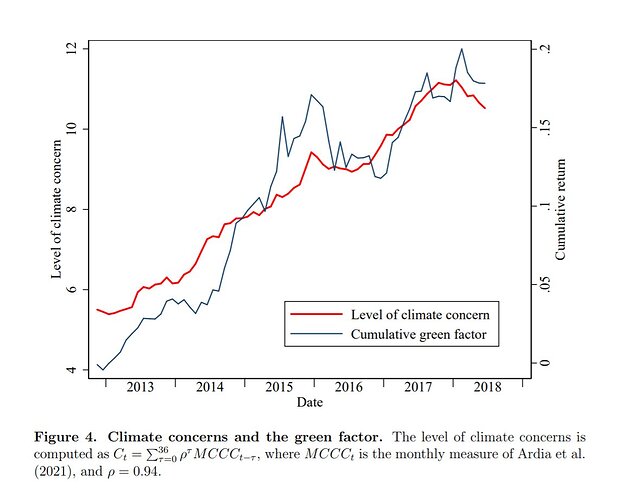 However, just last week I had a lengthy late night discussion with another successful and influential financial associate of mine who threw a decidedly different, and even sinister, light on this push behind ESG investment programmes

What follows is my paraphrasing, as best I can recall, of the gist of what was being said.

Let’s not beat about the bush - start with a bang - in a nutshell he alleged that effective financial ESG is actually Social Marxism in the meeting room masked as environmentalism aligned with social progress and that we should fight it like a disease.

Now that statement understandably came over to me as more than a little bit strong, but as the discussion moved on and the night drew in I began to see another aspect to ESG.

He further propounded that the ESG crowd doesn’t give a damn about the environment or social justice, they care about control over the flow of capital - a point that I really couldn’t take issue with. That it’s also a money grab by the most privileged in society who can shape global policy in a way that will FORCE capital to flow in their general direction. The “experts” in our society are some of the least remarkable people in human history. When Blackrock is the one pushing ESG, you know its BS.

So by now I was beginning to sit up and ask some serious questions. I know enough about Blackrock from my own reading and investigations prior to investments, and no I would never have considered them to be a company that cared about the environment. Sadly, a fact that is also true about many other groups and companies claiming to be part of the environmentalism movement.

Which, when I asked the now obvious question, “How will they do this?” we got to the nub of our discussion through his response that ”By using the ultimate control mechanism today, ESG.”.

They can create a “Climate Emergency” and they can force all types of actions and restrictions, it doesn’t have to be done by voting or laws. They are doing it through the private sector, banking, finance and business. This is being done, that is the ‘THEY’, by the key non-governmental organizations the International Monetary Fund (IMF), World Economic Forum (WEF), World Health Organization (WHO), World Trade Organization (WTO) and the United Nations (UN). They all have an agenda to control every aspect of your life. They tell us on their websites, in their books and through their speeches. They have a plan to accomplish it, that most are missing - understanding it is the first part to defeating it.

Feeling a little bit more relaxed by now, and amongst friends, by now he had dropped his guard totally and outlined what he termed ‘A Push to Totalitarianism’ through centrally planned, controlled and captured investment from a previously free, open, and competitive market.

The move to totalitarianism happens in stages he said - firstly it is triggered by “FEAR”. If they can scare us enough, then we need them to protect us. We need safety. By creating a victim mentality, we then search for a saviour, and the state ‘shows’ it is standing by to protect us. And now the ultimate fear: “the world will die” and if you don’t give up all your freedom, you will kill the world

Even better, if they can scare you enough, not only will you give up your own personal freedom, BUT… you will also demand others give up theirs as well, pushing people against people. Divide and conquer.

Using the examples of 9/11 attacks in the USA after which they “feared” terrorism, much the same as after the UK’s 7/7. A faceless, nationless, invisible enemy was presented that could attack us anytime, anywhere. So what should we do? How about give up our freedoms of privacy, search and seizure, due process, etc. The introduction of the Patriot Act in the USA and the UK Investigatory Powers Act saw more freedoms die than at any previous time.

He then moved on to the most powerful, and perhaps most credible part of the argument he was putting forward to me - that the ultimate scare is the ‘Climate Emergency’, a title that has evolved over time but has been preceded under the guise of many other ‘scary’ nomenclatures such as ‘Global Warming’, ‘Melting Icecaps’, Polar Crisis’, ‘Greenhouse Gases’, ‘Carbon Footprint’, ’Rising Sea Levels’ and so on; you get the picture. All, he claimed, as a means by which they can scare us the world will die, to prompt us into taking drastic measures. Remember, you wear a mask not to protect you, but me! So give up your freedom, FOR ME.

He then pointed me at an article that alleged the Rockefeller foundation had already given us the playbook for Climate Change here: Rockefeller Foundation–funded prof: Govts could use lockdowns to tackle ‘climate emergency’ | News | LifeSite using the control mechanism today of ESG.

These are being forced onto businesses through policies by non-gov agencies and corps. Sustainable finance, if you want money, then you must adhere to this or if you’re not compliant, then you’ll be starved of funds. Their goal: starve non-compliant companies of funds. As Mark Carney has clearly stated, if your business doesn’t adhere to this, if you don’t bow to the mob, if you don’t buy into all of this and make these changes they require, then you will be as he calls you, “Climate roadkill”

Let’s not forget for one second exactly who or what Mark Carney is. He is the elite of the elites. Former head Bank of England, and Bank of Canada, a Trustee with WEF, an advisor to the Canadian PM, and the UK PM. He’s part of the UN Special Envoy on Climate Action and Finance. Now why should those two, which under normal circumstances might be seen as odd bed-fellows, be tied together?

To get a better idea of this and Carney’s plan then read his book: “Building a better world for All” in which he states: To save the world “requires rigid controls on personal freedom” & “severely constrained choice, less flying, less meat, more inconvenience, and more poverty”. That should start a few alarm bells ringing.

So in essence he is rehashing his version of Marxist ideology, a system which history has repeatedly proven does not work. Take Cuba, for example, they’re famous for being a sugar-producing nation, but under socialism they had to actually import sugar. Venezuela has the largest oil reserves in the world, but after taking over the means of production, the system, they can’t get it out of the ground.

The key to combatting this movement is to push harder for good old fashioned competition. In the US we have seen New York and California overtaken by the Florida and Texas who successfully pushed back; now the governors of the two former States are being recalled and sued. Internationally we a similar pattern taking place with some individual countries. Almost by contradiction we have China, for decades a strict communist country with extreme poverty unable to compete in the world until they opened up some free trade zones, and introduced a form of capitalism. They had to ease restrictions and give more freedom back in order to compete.

Now that was a lot to digest in one evening and assess properly so since then I have been researching for as much more background as I can find. So far the negatives I have unearthed on ESG, whilst being hidden behind ‘the push’, seem (to me at least) to outweigh the positives. The politics has clouded the scenery very successfully and in a less than subtle way whilst the common sense key factors of traditional investment have been obscured and discarded as ineffective and unacceptable.

This I find very worrying especially with the power of the non-governmental organizations fully behind this. It would be interesting to read other thoughts on this from commentators?